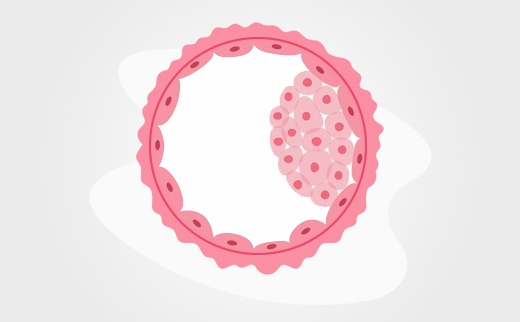 What is “Blastocyst Transfer”?

Blastocyst transfer is an assisted reproductive technology that has been incorporated with in vitro fertilization (IVF) treatment to increase pregnancy rates while simultaneously decreasing the risk of multiple pregnancies. The embryo viability is extended in the laboratory environment using improved medium systems until they reach the blastocyst stage of development on 5th day. Culturing embryos to the blastocyst transfer stage is highly dependent on both the intrinsic potential of the individual embryo, and the quality and capability of the IVF laboratory.

What is a Blastocyst?

After fertilisation, the egg starts to divide and develop into an embryo. Embryonic division progresses from one cell to two, four, eight, sixteen cells, etc., until several hundred cells have developed and the resulting embryo, now a blastocyst, can implant itself in the uterine wall.

The stages of embryo development are as follows:

At the stage of two to three days embryos the embryo has between four and eight cells inside the shell or zona pellucida, and, they must continue to develop inside the uterus for four to five additional days before they become blastocyst stage embryos that are ready and capable implantation. A blastocyst stage embryo is a highly differentiated, highly developed embryo that is ready to implant to the uterine wall.

Why are blastocysts so important in IVF?

In the blastocyst stage the developing embryo’s own genes have been activated and take over the remainder of the development. This is known as “genomic activation”. In its early growth stage, the embryo receives all of its energy for successful cell division from the mother’s egg. After the third to fourth day the embryo activate its own genes to continue to produce further cell division and differentiation.

Approximately 30% of embryos have the capability of successfully activating their own genes and developing into a blastocyst. Blastocyst stage embryos is biologically healthier embryos enough to successfully implant in the uterus and continue development through to a full-term pregnancy and delivery of a normal, healthy baby.

What are the advantages of blastocyst transfer?

What are the success rates of blastocyst transfer?

Approximately one-third of embryos of the fertilised eggs develop into blastocysts at all. If an embryo reaches this stage, there is a higher chance of implantation. It is known that embryos at the early stages of development can carry genetic defects in about 60% of the embryos, while at the blastocyst stage only in 30% of the embryos, since most of the “defective” embryos do not live up to 5 days. The chances of getting pregnant after blastocyst transfer are very high compared to embryo transfer at an early development stage (day 2 or 3). In women up to the age of 30, the chance of success is between 50 and 60 percent, and for women aged 30-39 it is between 35 and 40 percent.

Blastocyst culture does not provide the same advantages for all women. Those with a low egg count and quality may indeed benefit from a day-3 transfer, in which the embryos are inserted in the mother’s uterus at an earlier stage. The best transfer method for a patient is a ‘personalised, individual medical approach’, thus striving for the best possible chance of success for her.